Kajalla
The Empty Queen, Crone Goddess, Lady of Despair
Power of the Dalerain
Major AoC: Curses, Despair, Disillusionment, Nightmares, Weakness
Minor AoC: Abandonment, Evil Witchs, Seduction, Summoning
Symbol: A gnarled staff, five withered fingers, a crow.
Allies: Malis, Tuar, Yilwyn
Enemies: Brigit, Catil
Avatar: Cleric 6 / Rogue 12 / Wizard 17
Kajalla appears as a wrinkled and decrepit old woman, though she can assume any shape or form that suits her purpose (any deity can do this, but Kajalla employs the skill more than most). Her clothing is worn and stained, her accoutrements scratched and dirty, and her manner foul and abusive. Those who meet her in this form and return the abuse are invariably cursed; those who treat her well without knowing her true nature earn at least a brief respite from her attentions.

Kajalla is known to be younger than Catil, but is otherwise one of the oldest and most secretive of the Dalerain. She is the head of a trinity of goddesses of evil, her companions being Malis and Yilwyn, and also allied with Tuar, the lord of the spaces below the earth. She was once a close patron and ally of Cheneitha, but that relationship has grown distant in recent centuries, and the Ice Queen is rarely found in the company of the Crone Goddess.

She is worshipped by witches and those who wish to bring harm to others, and she is appeased by nearly everyone. Her priests are manipulative and cruel, and often assemble small bands of like-minded individuals and monsters around them to further help them sow despair and and disillusionment. Many hags are aligned with Kajalla's faith, though few hags actually worship her -- it is not in their nature to acknowledge a power greater than their own.

Posted by Nathan Irving at 8:35 AM No comments: Links to this post

I tend to forget that this resource exists...I wonder if I can auto-email the link to myself once a week?
Posted by Nathan Irving at 11:42 PM No comments: Links to this post

So this is my backyard now.

And a pine and a spruce snapped off about 30' up. 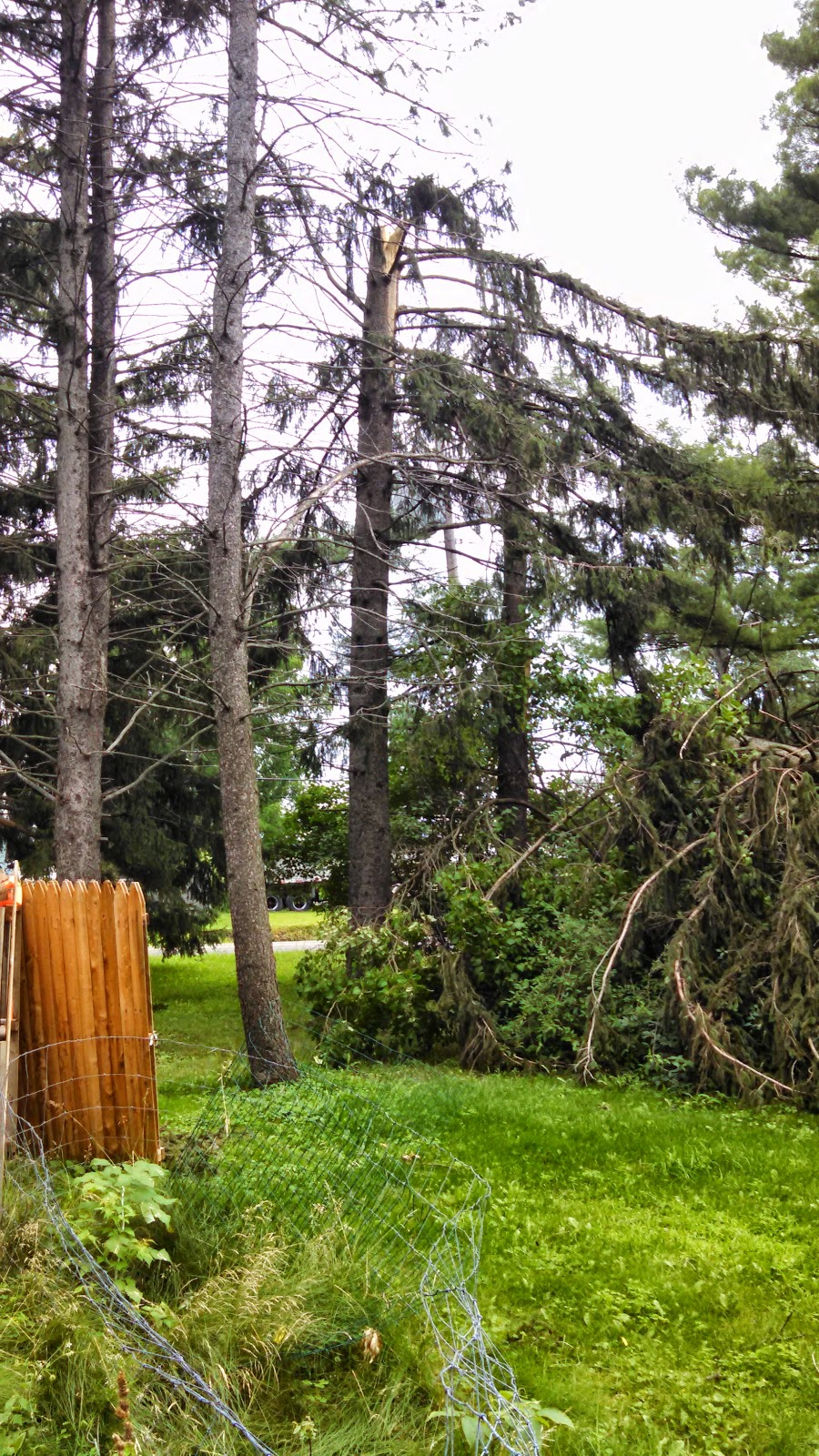 The big 'un is a black walnut, which has a beautiful wood that was extensively used for furniture making. I have a friend whose father has an alaskan sawmill, so I'm hoping to get the walnut sawn into boards. Quite frankly, it's too big for me to do anything treehouse or playhouse with, but the spruce & pine have possibilities - sizeable trunks, and still well rooted.

The amazing thing is that not a single thing was damaged. I had parked my truck and trailer out back in the trees, and nothing fell on them. A very large branch landed next to our shed, but didn't damage it in the slightest. The wooden fence is unfinished, and the walnut squashed the black raspberries and the wire fence, but both will bounce right back up.The evergreens smashed the lilacs and forsythia I was going to cut back anyhow, and missed by 2-3' the baby spruce my daughter planted last year.

PS - Since everyone says it: I do not have a wood-burning stove or fireplace, and I have 3 brush piles already, so I'm good on bonfire material. I will probably use the softwoods to help construct some terracing on the south side of the garage for strawberries, and the walnut I'll split with the sawyer. The smaller branches I'll make spoons & suchlike out of.  The remainder I'm piling out back with the intent of letting it rot.

Posted by Nathan Irving at 2:56 PM No comments: Links to this post

Staying at campgrounds and the occasional motel around the country has been horrible for writing (it's still almost done; I swear!  My cousin has read the rough draft and loved it!), but great fun for the most part. Two nights of rain and an overly bold raccoon have left us a bit tired of camping though, so we're in a hotel in Pittsburgh for the last few nights (it's undergoing serious renovations, which puts it in our price range.)

Awesome trip though.  Turns out I really like Ohio.  Who knew?

In other news, my housesitter is getting a bonus. A major storm through our town, and she sat in the basement with our pets (we've NEVER had to do this). She came up to find the storm had uprooted possibly the largest black walnut tree in our backyard: the hole alone is 10-12' feet across and at least 4' deep from the photos and her description.

I used to build houses, and I recently worked for a year building playgrounds. Incredible, amazing fun. I've built two custom treehouses recently that have gotten some attention. I have a masters degree in landscape architecture. And now I've got a giant tree trunk and root structure to play with and really do something amazing with no boss but myself and my daughter????  As much as I'm sad about losing the tree, I'm practically giddy with the possibilities.  :)

Pictures when I get home.
Posted by Nathan Irving at 11:25 PM No comments: Links to this post