I've finally managed to finish printing & assembling the last issues of Strange Races, aka Secrets #2. They'll be in the mail tomorrow. I'm very sorry for the delay.  :(

Posted by Nathan Irving at 10:01 PM No comments: Links to this post

Secrets is currently Sold Out!

Print copies of Secrets #1 & #2 are temporarily sold out.  I'll make more as soon as I can. Until then, I'm taking the paypal link down.  PDFs are still available!
Posted by Nathan Irving at 7:31 PM No comments: Links to this post

A player in my brand-spanking new 5e campaign wanted to play a leshii. I also needed to fill up a half-page in Strange Races. So, here's the quick n' dirty Strange Races iteration of the 5e rules for the leshii race. I expect they'll be tweaked slightly as I become more practiced with creating and converting races, but I think it's workable now.

Update: This just got on En World's frontpage, so I'm putting some leshii info here rather than making you chase a link around. If you want more new player races, check out Strange Races: pdf available here, a print copy available on the sidebar. They're not 5e-mechanics, but I might do post conversions here on the blog later on.
Leshii
The leshii are a race of humanoid nature spirits seemingly hewn from wood. Male leshii are six to seven feet tall, with nut-brown skin looped and whorled like the rings of a tree. They are lean and muscular, with rough, craggy features and a crown of branch-like horns. Leshii women are smaller, and their skin is pale and smooth, reminiscent of birch bark. They have long gold or ebony tresses and delicate features.

Leshii are, first and foremost, primal spirits of the forest and the hunt. Of the nonhuman races, they are the least human in manner, being guided solely by deep instinctual urges and their own whims. They only faintly understand the concepts of empathy, laws, and civilized society in general, and live solitary, nomadic lives avoiding other leshii when possible.

Leshii are curious and inquisitive, but well-tempered with a predator’s caution and cunning. They are patient and prefer contests of skill and wit to games of chance, and are adept at feigning weakness or passivity to lure an opponent in. They are territorial and protective of anything they consider theirs.


Adventuring leshii are rare but not unknown. Young leshii go abroad to find new forests or gain experience, while older leshii become bored, or simply never settle down. They seek out companions to protect and watch over, and live itinerant, mercenary lives for as long as it amuses them.

Leshii Racial Features
Abilities: +2 Constitution
Size: Medium
Darkvision: 60’
Woodlore: Proficient in the Nature skill
Unflagging: Leshii are less affected by exhaustion than other creatures, and have advantage on Constitution saves versus exhaustion.

MALE LESHII
Abilities: +1 Strength
Durable: Advantage on saves versus Poison, and resistant to poison damage.
Hunter: Proficient in the Survival skill.
Posted by Nathan Irving at 8:19 PM No comments: Links to this post

Q: What is Secrets #2: Strange Races?
A: Secrets is a fanzine for Swords & Wizardry and other OSR games. Strange Races is an issue dedicated to new (and slightly unusual) player races. 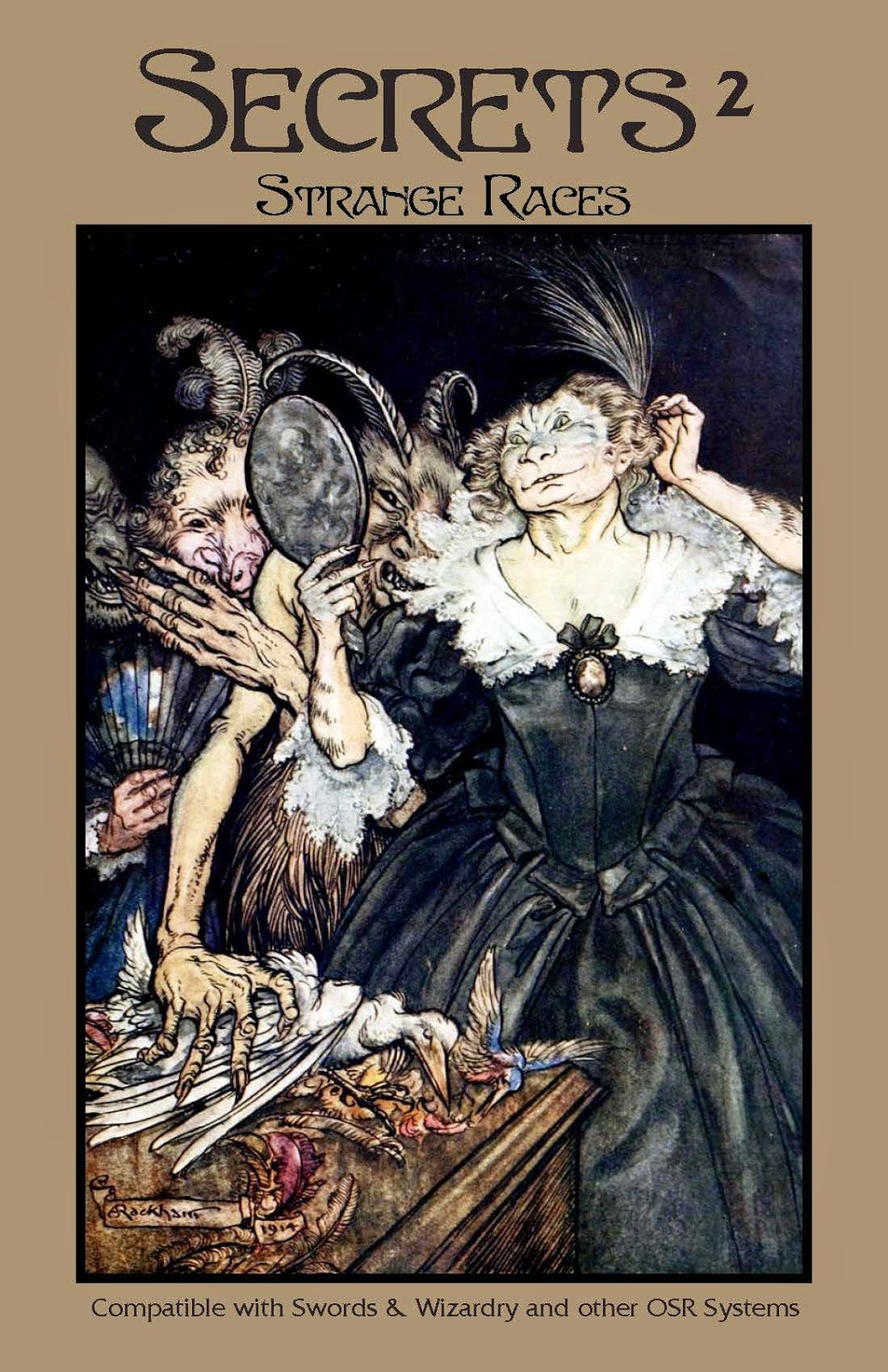 $4: The print version is available for $4 through the Paypal link in the sidebar, and each print zine includes one of ten different bonus content stickers.

$6: Print + pdf. Order through the Paypal link to the right, and I'll email you the pdf ASAP and send you a print copy.
International orders are the same price (yes, really), but it's a little easier on me if you order the print + pdf, and then you can enjoy the pdf while waiting for the envelope (although it only took 3 days for it to get to Barcelona, which is pretty darned good - it took longer to get to some USA addresses.)

Reviews
Greg Gorgonmilk snuck a micro-review of Strange Races into his OSR PDF Roundup post.  He calls the leshii and the clockworks "crazygood".

Posted by Nathan Irving at 5:34 PM 4 comments: Links to this post