At this point, the map is basically done. There are parts that I might go back and redo (the glory of scanning, people!), but it has all the elements I wanted to include. 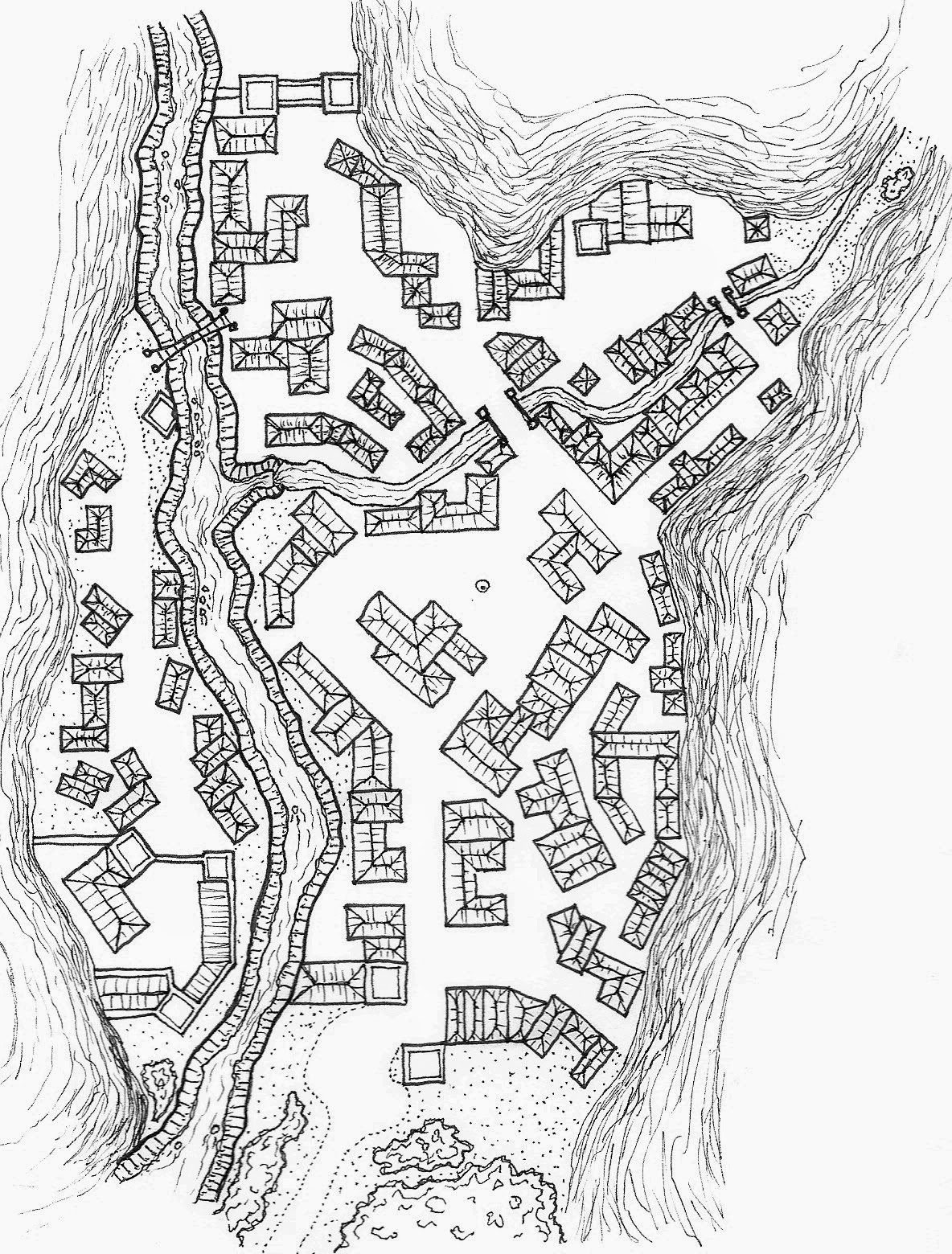 I started doing the roofs on the left, then the upper portion, ending in the upper right last night. This morning I went out and bought a .005 pen, and finished the center/right section. I think the later bit looks a lot better, so I may roll back a stage or two and redo the earlier roofs. Since I have scanned at several points, I can actually print a "clean copy", only do the roofs I want redone, and merge the two versions in photoshop.

I'm not wild about the stippling either. That's something to play with. I tried to use it to denote grassed or (relatively) untrammeled areas, but there aren't that many in the village. Flipping it, and using the stippling to mark the paths and streets, might work better, but I suspect it will make it too busy.

There aren't a lot of woods, so it's fine.

I'm VERY happy with the river; less so with the sides of the gorge it's in.

The hillsides came out pretty well. I'm going to GENTLY darken the bottom a bit; the bottom left corner of the map keeps drawing my eye, so I'll try to extend the effect around.

Posted by Nathan Irving at 6:48 PM No comments: Links to this post

I work on vellum a lot. You can get 8 1/2 x 11 sheets, and you can print on them. They're not as transparent as tracing paper, but pretty close and a lot heavier. It also isn't as absorbent as regular paper, so if you're working with markers it's easier to control shading and tones.

Step one was sketching out the geography. I knew it sat in a narrow spot in the mountains, with the valley opening up below it and two narrow valleys leading out above it. A river gorge partially bisects the town, and a stream provides drinking water & powers a few mills. I sketched out the buildings in pencil - the partially completed version was the first WIP post - and scanned it.

Frequent scanning is important. I can scan a map, clean it up, erase any mistakes I've made, and then print it out on vellum and keep going. If I goof, I reprint it from the last scanned version and try again.

I didn't want a grid on final version, so when the pencilwork was done, I taped a piece of vellum over it and started tracing. The version below shows the buildings and ridgelines, but none of the geography. Later tonight or tomorrow I'll do the geography, and then go through the town and add details. 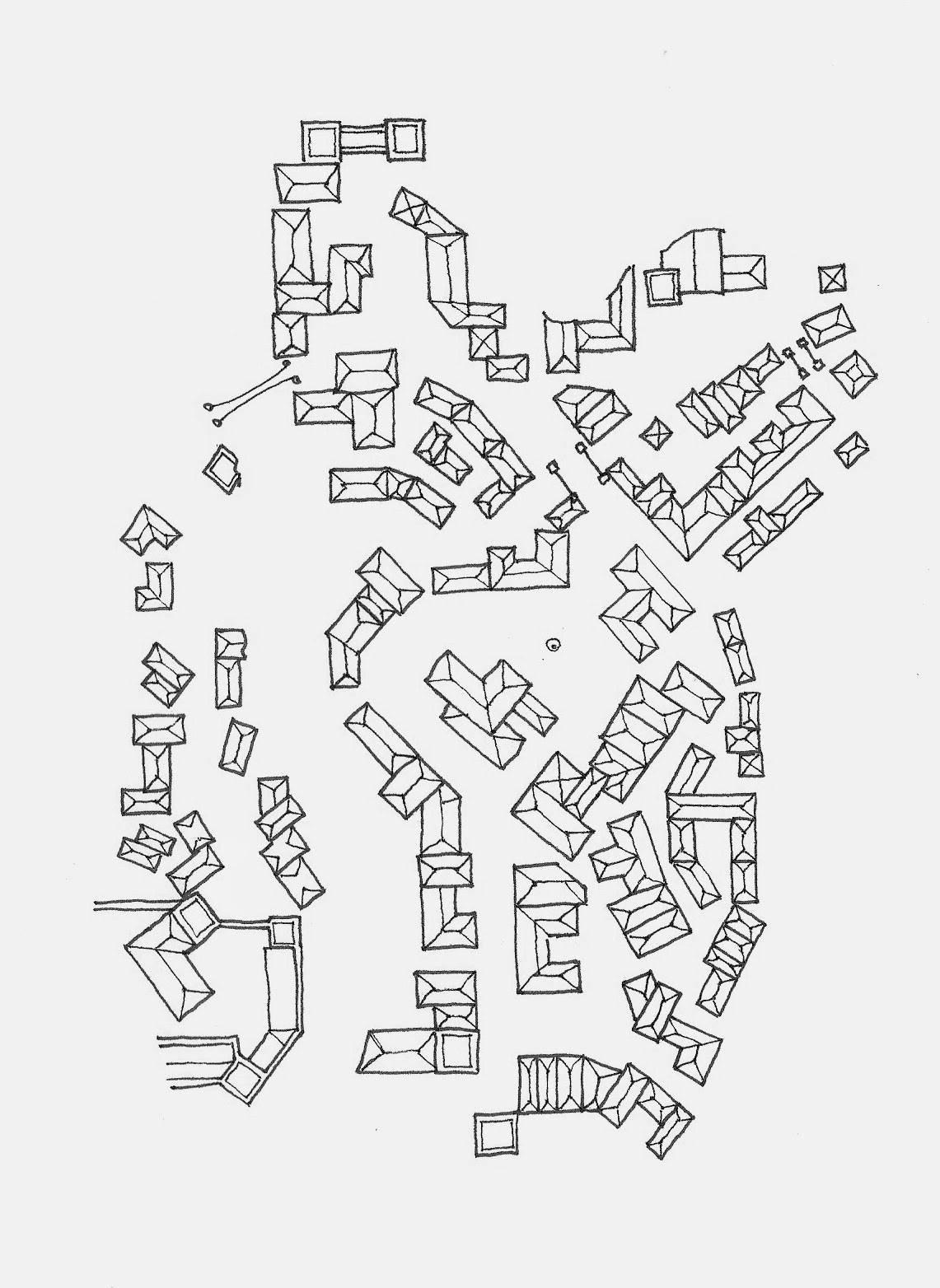 Posted by Nathan Irving at 4:38 PM No comments: Links to this post

Wanted to do a village map. Here's the work in progress. No ink, just pencil. There's a gorge on the left side, and a stream through the village that empties into it. 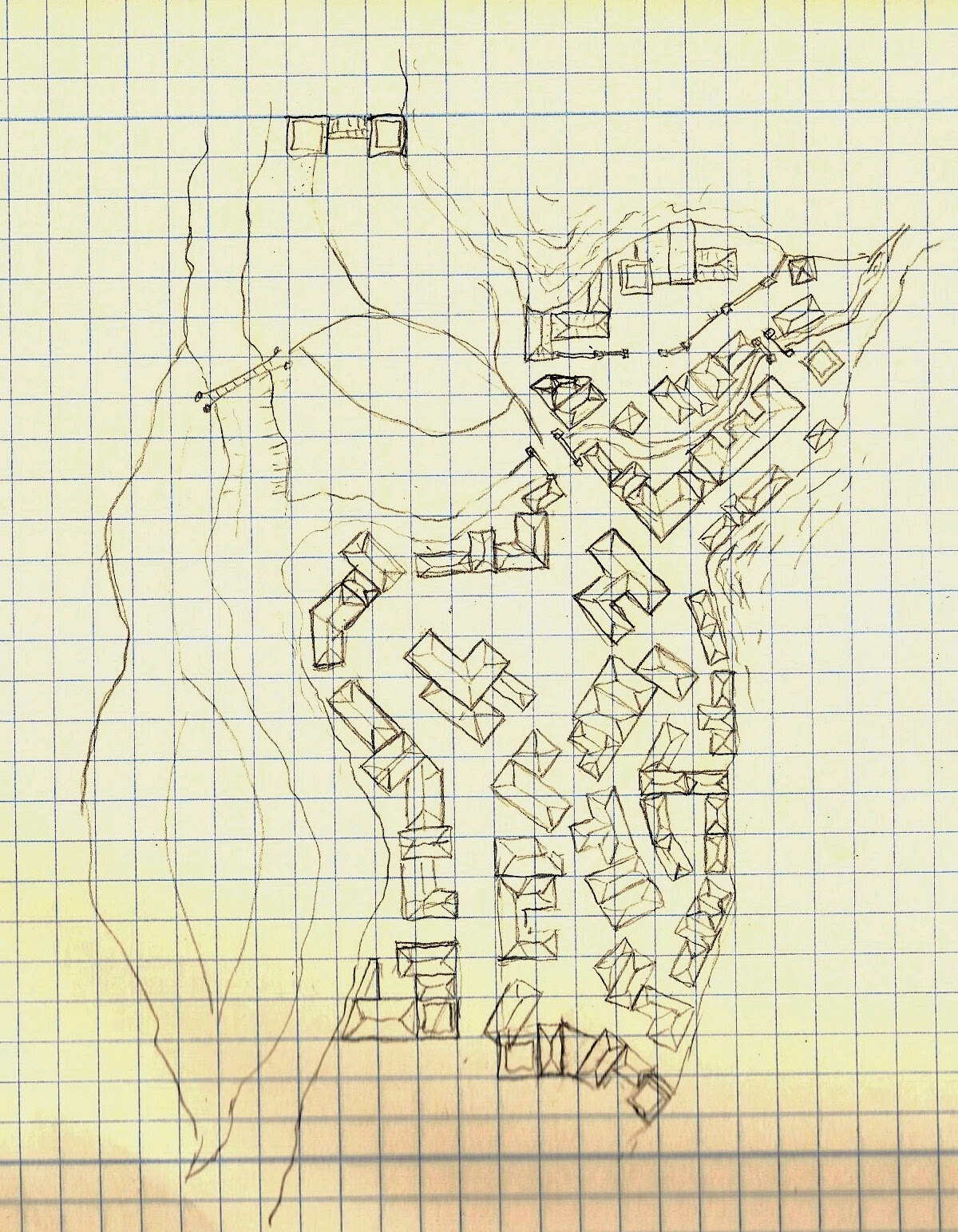 Posted by Nathan Irving at 12:42 PM No comments: Links to this post

I'm experimenting with dual-stat blocks for monsters. This is a first draft, so expect changes and feedback is strongly desired.
Update: Revised stat block appearance slightly.
Update #2: They should be neutral evil instead of unaligned. This is the first 5e monster I've done, so I'm simultaneously learning how the process works and figuring out a stat block format. Honestly, from here on out I'll probably start with an existing stat block and make changes to it rather than build one up. Working on a map to go with this.

Astes Astes are a class of monsters created with the application of dark magic. Astes creatures combine the body of a serpent with the head of another animal, distorting them to malignant ends. Their length is equal to twice their hit dice. They are of low intelligence, enough to be cunning and vicious, but not enough to disobey. They are used as guardians and assassins.
Apisastes (Bee-headed)

Apisastes are yellow and black striped snakes with the head of a giant honeybee. They have a vicious bite and thrice per day can spit a honey-like substance up to 10’ that rapidly hardens. If the victim fails their save they are encased, cannot move, and begin to suffocate. On a successful save the target avoids most of the substance but can only move at half speed until they spend a turn cleaning themselves. The apisastes can also spew honey on a target it has bitten, in which case the victim has a -2 penalty to their saving throw.
The Honey Hole
Every surface of this natural chamber is covered with layers of a thick, rigid, golden substance. Long pendants hang from the ceiling, yellow sheets appear frozen in the act of flowing down the walls, and luminous golden layers cover the floor. The original stone surroundings are only dimly visible through accreted layers of the crystalline substance. An opening to further chamber can be faintly perceived underneath the accumulation, and a faint buzzing vibration fills the room. Closer to hand, however, a withered arm protrudes from a bulge on the floor, and a shadowy figure can be seen against the wall, preserved beneath the hardened layers.

This room is the lair of 1d4+1 apisastes, who have completely coated the small cavern in their secretions. The substance has hardened and poses no immediate danger, but the apisastes move through a complex network of voids and gaps far too small for the characters to access, allowing them to attack without exposing anything more than their head. The golden substance is brittle and shatters easily, but a character smashing it without taking precautions (such as gloves and a mask) must make a save or take 1 points of damage from razor-sharp shards each round.

The two corpses in the room have a few gems and coins on them, less than 200 gp in total. The real treasure lies in the second room, the hive of 3 giant bees (use giant wasp stats if giant bees aren't available in your chosen system). The bees use a narrow natural chimney in the rock to access the room, which the apisastes have largely sealed off from their own lair (the apisastes can enter the hive through small holes that the bees are too large to enter). The hive is filled with thick combs of valuable honey, literally barrels of honey. A third corpse is encased on the floor between the two rooms; he has a few gems and coins, and an amber bee figurine of wondrous power (the figurine transforms into a monstrous giant bee once per day for one hour with double HD and damage, and can carry one rider.)
Posted by Nathan Irving at 11:21 AM 4 comments: Links to this post

NOT THE OSR Superstar Map

So the OSR Superstar competition has wrapped up, more or less. I forget what actually happened, but I was unable to submit an entry in the final round. I did complete the map (again, more or less), but not the adventure. Turns out this is a complete and utter fabrication. This is a DIFFERENT map based on a partial that Dyson posted months ago. I worked on it around the same time as the OSR map, and got the two confused in my head. Bugger.

I haven't looked at this for about 9 months, but I really like how the map came out. There are discrete areas, but it's possible to reach all of them from within the dungeon. The multiple levels worked out well, and I like how the grid changes orientation as it crosses the chasm. I think I'll find this and work it up for my current campaign. This part is true. I do like it. 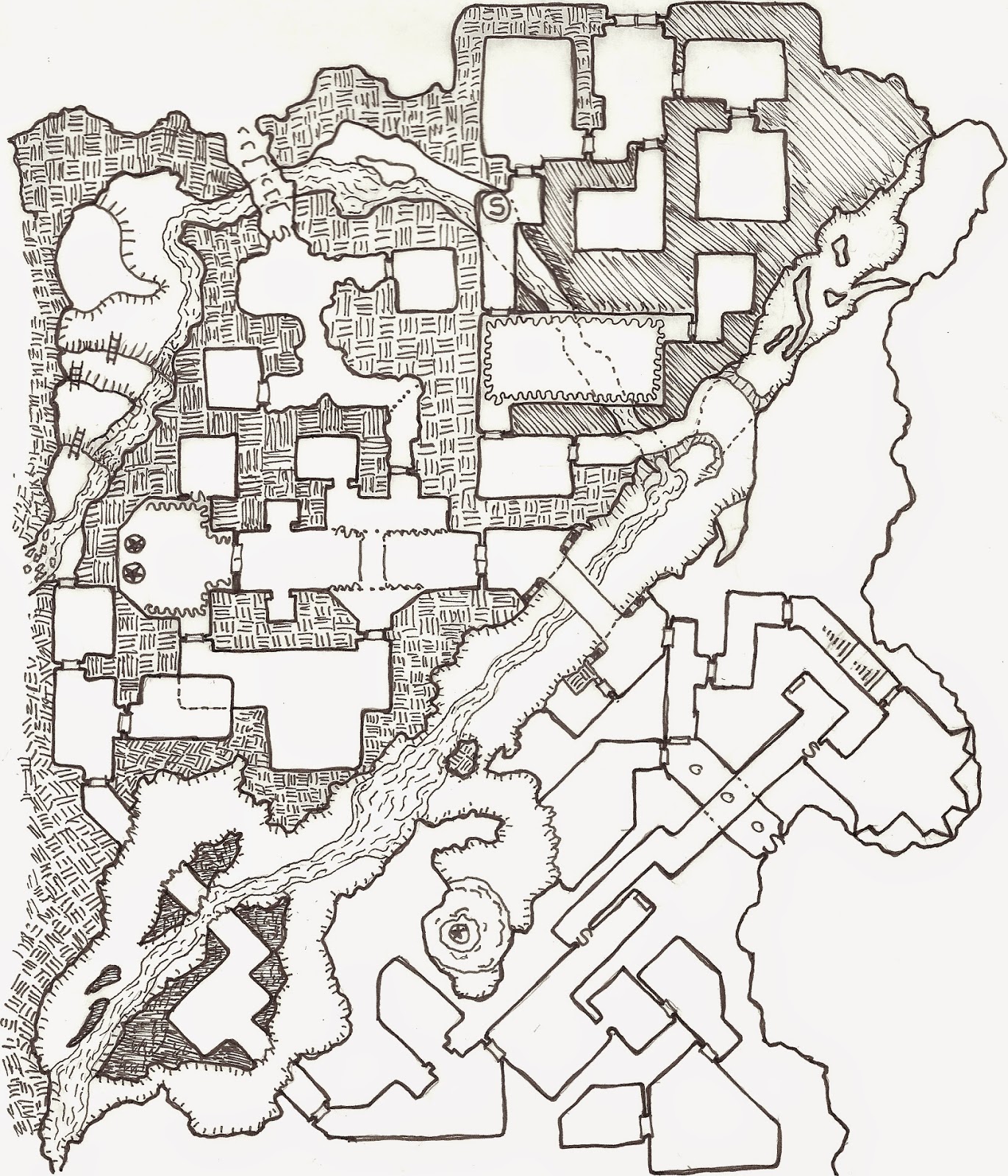 OK, I've had questions about the levels, which are confusing and aggravated by the fact that I didn't finish the hatching or some details. There are 4 levels. The stream flows from center left (the conch cave) and exits the map at lower left.

Level 2 is the complex in the upper right. It has a secret trapdoor down to the stream passage; an exterior entrance; and a passage into the chasm that descends a ramp to the chasm floor.

Level 3 has a secret exterior entrance at upper left, and another at lower right, which should probably have some kind of ledge outside since it's higher than the level 2 entrance. It crosses the chasm via a built stone bridge. A flight of stairs leads to level 4, or you can jump off the bridge into the chasm, or off the room that crumbled into the statue alcove off the chasm.

Level 4 is at the bottom of the map, and reached via the stairs from level 3, or ladders in the conch chamber, or by climbing/flying up the chasm. The stream and chasm have shifted since the construction, destroying some of the hallways and making the top complex a little less secret. I think there is supposed to be a rope bridge over one section, though.

The chasm initially was supposed to be wholly underground, but I'm leaning towards it being open right now. It lends a different dynamic to the place. If the chasm is open, the large alcove with the statue is covered, as is the section at upper right above the ramp.

Posted by Nathan Irving at 1:35 PM No comments: Links to this post