Class Features
Ritual Support (1st): The cultist can add this number to the Summon Minion roll of a cultist of higher level.  A cultist cannot summon their own minions while supporting another.

Summon Minion (1st): Cultists have the ability to summon an other-dimensional minion of their patron.  This ability can be used at will, but each successive summoning after the first in a day inflicts a -2 penalty to the cultist’s duration and summoning rolls. The cultist must roll a saving throw to dismiss a demonic servant before its duration expires; on a failed save, the demonic servant remains until the end of its duration, but turns on and attacks the cultist. A cultist cannot summon another servant without dismissing the first, except as noted below.

To summon a cult minion, the cultist rolls 2d6 to determine how many rounds the cult minion will remain. The cultists then makes a summoning roll on 2d8 and checks the result on the table below, first finding their level reading down to find the result equal or less than their summoning roll, and then reading across to find the total Challenge Level of the summoned creature. A result of 0 or less on the final result (2d8 + modifiers) means the summoning fails. 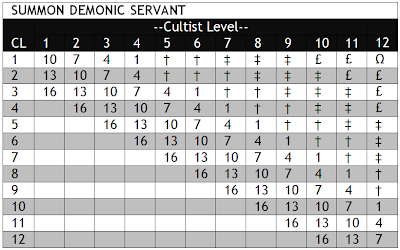 There is a small chance (no greater than 1% per HD) that an avatar of the patron chooses to manifest in place of the demonic servant.  The avatar automatically has 12 HD and +8 CL in special abilities.  The avatar requires at least 1HD per round in sacrifices to remain manifested, and it is not particularly picky about where the sacrifices come from. Cultists willingly sacrifice themselves to maintain the avatar; a newly manifested avatar typically consumes the essence of a cultist the first round it appears to gain enough power to last at least a few rounds (it can completely consume a willing sacrifice in a single round). This is one reason why more powerful cultists surround themselves with lesser followers at all times. 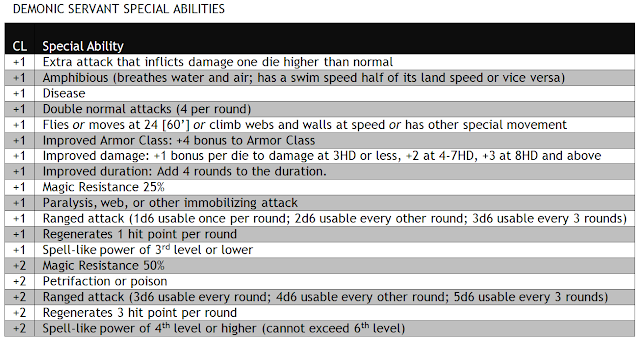 Examples
·         Lothqua the White is a 4th level cultist.  He rolls 2d6 for duration, and gets a 7, which isn’t bad.  He rolls 2d8 for his summoning roll, and gets a total of 13. Finding his level (5) on the top bar and reading down, he finds he can summon a CL 5 demonic servant, which is pretty good.  (Lothqua gets CL 6 on a result of 13 or greater; if the summoning roll had been 16, he could have a CL 7 creature.)  Lothqua decides to keep things simple, and summons a basic CL 6 demonic servant (6 HD, 4 [15] AC, two attacks at +6 to hit and 1d6 damage, 11 save). The demonic servant appears at the beginning of the next round and remains for 7 rounds before disappearing.

·         Lothqua needs to summon another demonic servant later that day.  He’s already summoned one, so his duration and summoning rolls both have a -2 penalty.  He rolls 2d6-2 for the duration and gets a final result of 4.  He rolls 2d8-2 for summoning, and gets a total of 14 – the highest he can get with a -2 penalty! This time he needs something sneaky, so he opts for a 3HD demonic servant and three +1 CL special abilities: Improved Duration (which increases the duration to 8 rounds); a spell-like power (invisibility), and a special movement power (moving silently). He couldn't lower the HD any further, because HD must be at least half of CL, and his next attempt will have a -4 penalty to duration and summoning.

Posted by Nathan Irving at 4:58 PM